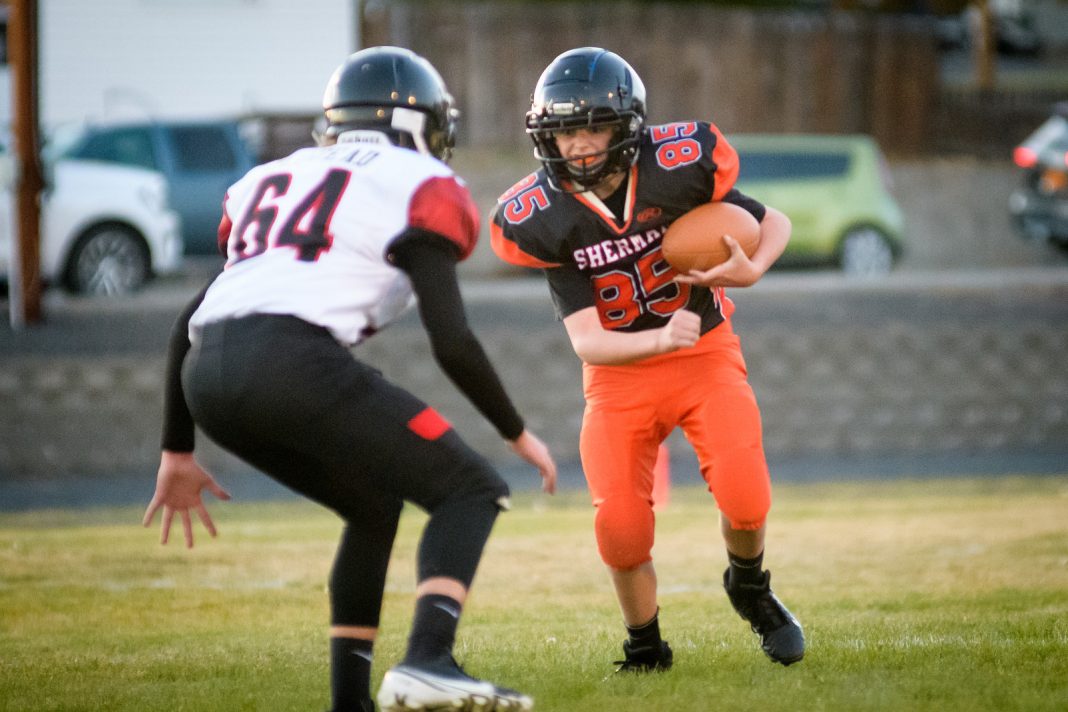 CONDON – It was a game that wasn’t supposed to happen, and very nearly didn’t due to a COVID exposure. With almost all of the Devil Dawg starting line out, the varsity contest was forfeited by Sherman-Condon but the Outlaws of Enterprise agreed to play a Junior Varsity game in order to get the younger kids some time on the field.

The Devil Dawgs started off with the ball recovering an onside kick attempt on their 45, but a strong Outlaw defense forced a four-play turnover on downs.  It was all Enterprise for the rest of the half.  The Outlaws scored on all five of their first half drives.  They also tacked on an interception that was returned for a touchdown, three extra points, and one two-point conversion to score a total of 42 first half points.

The Devil Dawgs had a few solid first half drives highlighted with solid running by Antone Avalia (freshman, Sherman) and Casey Nelson (sophomore, Condon).  Two freshmen split time at quarterback in the opening half.  Blake Carnine (Condon) and Gabe Fritts (Sherman) took turns under center and gained some valuable experience.

The second half began with the Devil Dawgs kicking the ball to the Outlaws, followed by the first Devil Dawg defensive stop of the game.  Your Devil Dawgs didn’t waste the opportunity.  After a nice drive down the field Michael Blagg (Sherman)—the third freshman to spend time under center—found James Phelps in the endzone for the first Devil Dawg score of the game.  Unfortunately, that would be their last score as well.  Enterprise would find the endzone one more time in the fourth quarter to make the final score 6-48.

At the half Condon took the time to honor their senior class by presenting their loved ones with roses.  Kallyn Wilkins, Kyrsten Smith, Abby Colby, Braden Carnine, Megan Aarnodt, Eduardo Barrera, Mackenzie Arnodt, Sam Buell Nordstrom, and Taylor Mills were all honored—Michael Brehuat and Gus Jaeger were unable to attend.

While the outcome was not what we hoped for, it was great to play some football in Condon again.  The last time high school football was played on the Condon High field was September 7th, 2019, just over 769 days.  It felt great to finally eat a hot dog at a football game.  Something my taste buds—but probably not my waistline—have truly missed.  Hopefully it’s not another 769 days before the next time the Devil Dawgs play at their home in the east.

Next up for the Devil Dawgs is their final game of the 2021 campaign as Rockets of Pilot Rock travel to Moro.  It will be homecoming and Senior night for Sherman so be sure to show up and cheer on your Devil Dogs one last time.  Kick off is at 7:00 PM.