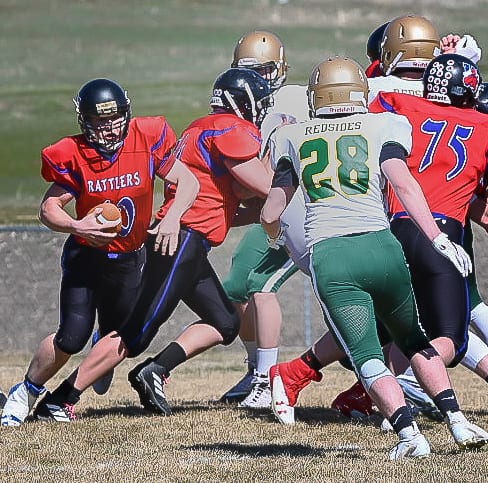 FOSSIL — The S. Wasco Co. Redsides have been unstoppable in their first 3 games of the abbreviated 2021 spring season. Apart from a challenging game against Condon/Sherman – S. Wasco has been on cruise control.

But the Redsides met their match and faced a tough Wheeler Co. team in Fossil on Friday. S. Wasco was able to pull out a 40-24 win but Wheeler Co. was in the game until the end.

The Rattlers came to play and brought hard hits and a power offense that had S. Wasco on their heels. The Rattlers were without running-back and safety Nathan Clark.

To start, S. Wasco kicked-off. The Rattlers drew the Redsides offsides three times and then had back to back 1st down runs. But the Rattlers had penalties of their own and turned it over on downs.

ON 4th & 4, S. Wasco narrowly completed a pass and #18 Remington Anderson-Sheer broke loose for the touchdown. The extra-point was blocked.

On Wheeler County’s next possession, the Redsides again jumped offsides several times and Wheeler Co. ran the ball well. After moving the sticks, Clint Rutherford took a second down handoff and broke a tackle for a 49 yard touchdown run. The extra-point was no good and the teams were tied 6-6.

S. Wasco was unable to move the ball on their next possession. Led by Thomas Chase and Logan Sweeney, the Rattlers claimed the line of scrimmage.

Coach Jerry Anderson had his defense ready. Anchored by senior linebacker Justin Bunch and 6-2, 235 lb. junior Thomas Chase, the defense delivered hard hits. Clint Rutherford and Tommy Bunch contained the Redsides from going outside. Getting the ball back, Wheeler Co. got big runs from Rutherford and good hard-fought yards by Tommy Bunch. An up the gut 5 yard touchdown followed by freshman Zach Neuburger. The momentum had swung to the Rattlers.

But the ensuing kickoff was disastrous for Wheeler Co. as S. Wasco’s Garrett Olson broke loose and ran it all the way back for a touchdown.

Wheeler Co. turned the ball over on downs on the next drive. S. Wasco spread the field and used a trick pass play to score a 33 yard touchdown and just like that, Wasco Co. was in control.

Wheeler Co. then drove the length of the field to the 25 yard line but couldn’t get the first down and the halftime horn sounded – the score 12-20.

Wheeler Co. kicked-off to start the 2nd half and the tone was set by hard hitting sophomore Tommy Bunch. The crowd was energized and enjoying the atmosphere.

Wheeler Co. contained S. Wasco’s running game but that opened up passing opportunities for the Redsides. Another TD pass from 6’5, 220 lb. quarterback Brock LaFaver made the score 12-26.

The teams then traded touchdowns and it was back and forth late into the 3d quarter.

Wheeler Co. needed a jumpstart and got it when Clint Rutherford took a Redside kickoff 90 yards to Wasco’s 3 yard line. Two plays later Rutherford finished it with a touchdown to make the score 24-32.

But the Redsides got a break on the next drive, as a broken play that appeared to be headed for a loss was converted for a 1st down. Two plays later, S. Wasco Co. scored the final points of the game 40-24 with 5:23 to play.

Despite the loss, Wheeler Co. played tough and obviously had S. Wasco’s number.

The final game of the season for the Rattlers is scheduled for April 1st against the Condon/Sherman Huskies. Kickoff is at 7 PM on April Fool’s Day in Moro. 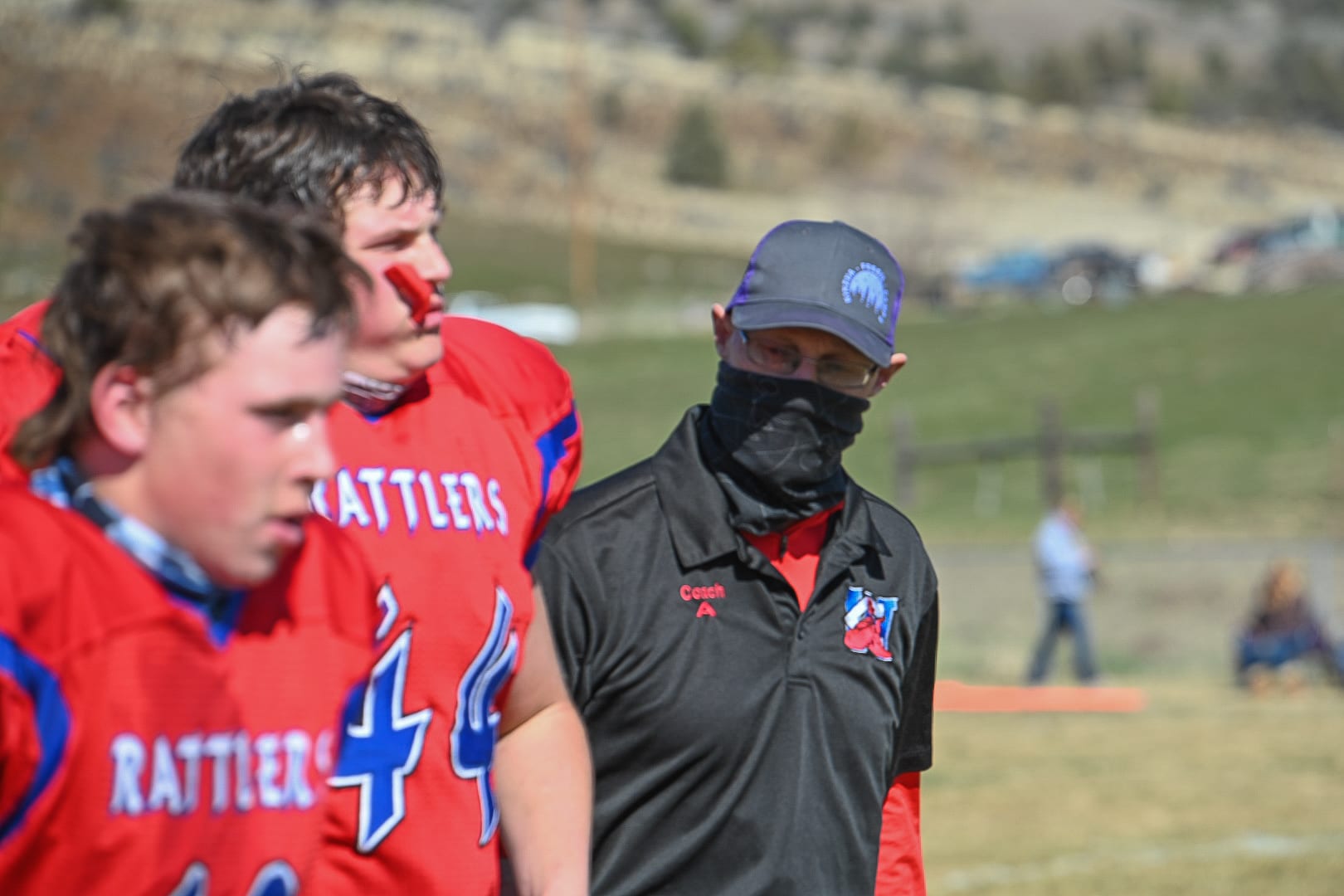