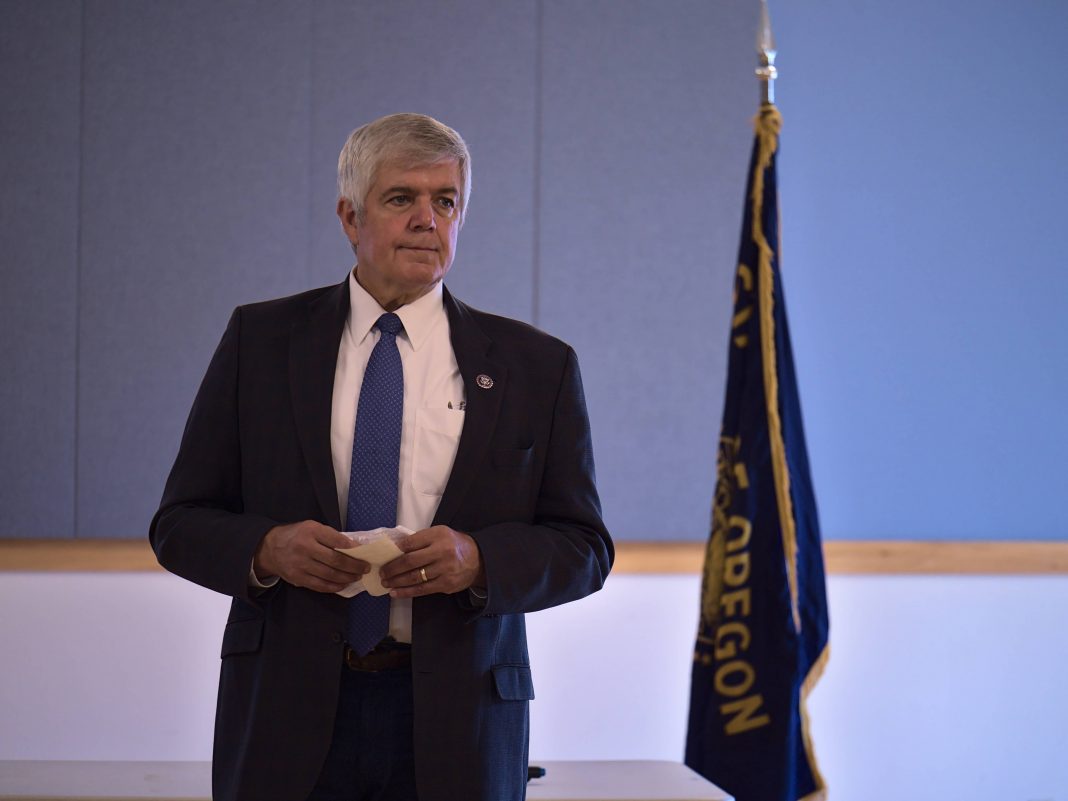 U.S. Rep. Cliff Bentz, R-Ontario, visited 11 of the 20 counties in his sprawling eastern Oregon district during the town hall tour, with Condon and Moro being his third and fourth stops. He plans to hit Wheeler County with a stop in Mitchell later this week.

“Greg’s a good friend. He seems to be happier every time I see him,” Bentz said during his stop in Moro, laughing a little.

Bentz praised the big work Walden did during his years in Congress.

“If I were to fault Greg for one thing, it’s that he did a totally inadequate job of explaining to all of us what a big deal Greg Walden is, and was, in Washington, D.C.”

As a freshman congressman in the House of Representatives, Bentz has joined two House committees and a handful of subcommittees. He sits on the Natural Resources Committee and is a ranking member of the Water, Oceans and Wildlife subcommittee, in part thanks to his background as a water attorney.

He also sits on the Judiciary Committee and is a member of both the Intellectual Property and Antitrust subcommittees.

“The Antitrust Subcommittee has been extremely busy in the area of breaking up big tech,” Bentz said.

He recently spent 26 hours in committee working on a series of bipartisan bills intended to not necessarily “break up big tech, but certainly to constrain their further growth.” All six bills were passed out of committee. Bentz asked locals to share their thoughts on tech censorship, for example the targeting of conservative voices on social media, among other issues.

Nearly two dozen people gathered at the Sherman Senior Center in Moro to hear him speak and ask questions.

Water and natural resources have been key points of interest for Bentz, due not only to his past experience but the increasingly dry conditions across the West.

“On this side of the Mississippi, we have 70 million people suffering from drought,” Bentz said.

Water is not flowing west from the Rocky Mountains the way it used to. The lakes behind the Hoover Dam are dwindling, and they’re getting to a point where they are going to have to start rationing water, which could happen as soon as next month, he said.

Bentz said he has been to the Klamath River Basin in southern Oregon 13 times in the past year to help farmers address increasingly dire water shortages in that region. President Biden reversed a decision made by the Trump administration to reserve Klamath water for farmers, instead mandating that water in that region be left for the fish in the lake and river. Bentz spoke to the urgency of finding a balance between the Endangered Species Act and the needs of Klamath farmers.

As many as 400 wells have gone dry in the Klamath region because water was not released to recharge that basin, and more than a hundred thousand acres of cropland are estimated to have been lost.

A few local wheat farmers spoke up, having felt the sting of drought locally with one of the bleakest harvests in recent history. One brought up the importance of crop insurance during times like this — for even in tough years, they can still pay their bills and farm-related costs.

Along with visiting drought-stricken areas of the western United States, Bentz also has toured the southern U.S. border to get a feel for the situation.

Under past administrations, migrants who arrived at the border would be held at a tent city while awaiting their immigration proceedings. Many opted to remain in their home countries rather than spend years in a tent city awaiting approval, he said.

Bentz said the current administration has made it clear that those under age 18 will be allowed entry immediately, and those with children under age 6 shall also be allowed entry, resulting in not only countless illegal border crossings daily, but countless more making the dangerous journey from their home countries on the promise they will be allowed to cross, then relocated to cities across the United States via bus or airplane.

In Condon, Bentz spent a bit of time on the immigration discussion.

“The border wall is a good idea,” Bentz said. “But by itself, it’s not going to work. It’s much more about the policies that surround how you address those who present asking for asylum. Right now, our policies say that if you are going to be killed or hurt in Central America, then you are allowed in.”

Back in Moro, Bentz also touched on the infrastructure bill currently facing Congress, and said although there are some good things in the bill, he will be voting against it for one reason — the country cannot handle such excessive spending right now.

“The short answer is, we can’t afford it,” he said.

“I anticipate that we will take power (in Congress) a year-and-a-half from now. When we take power, I want to be able to do stuff that helps us here,” he said, referring to eastern Oregon. “So often, people in rural areas say they’re not listened to. Here’s your chance.”

One retired farmer asked about recent debt-relief payments issued primarily to minority-owned farms, for example women and people of color — potentially forcing white farmers out of business and off their land if it continues. He said he believes issues related to race are going to tear this country apart.

“There’s a constant movement to bring equity to these places, in these different money bills,” Bentz responded.

Bottom line, he said: “When it comes to matters of race, we can all do better.”

“The only thing I’ll say about Portland is: I am so sad that the people running it aren’t protecting those who live in it,” Bentz said. “As my brother, a former county sheriff, says, ‘When it comes to law and order, you can’t have law unless you have order.’ And they’ve lost control of their town.”

“We couldn’t stay at the Hilton,” he said of finding the hotel closed on a recent trip to the city. “It’s in downtown Portland. Nobody wants to go to downtown Portland anymore. That’s a travesty.”

Regarding the labor shortage, he said one problem employers are having is finding workers who don’t have drug issues.

“What we’re trying to do is gather up data to show the people of Oregon the unfortunate consequences of legalizing all kinds of drugs, because they sure have been unfortunate.”

Another cause for the labor shortage, Bentz said, is the number of employees who are getting more in unemployment than they would by working full time.

Lack of not only affordable housing, but lack of housing altogether in rural parts of Oregon, especially Sherman County, was a concern raised by many in the audience. They pointed to the difficulty in attracting skilled workers and teachers, because there’s no place for them to live. One woman in the audience said she was living in a horse trailer, simply because of the lack of available housing in the county.

County leaders responded with critiques of the antiquated Oregon land use laws and zoning codes that prohibit families outside city limits from building new dwellings, on top of restrictive growth boundaries inside city limits.

“Our forefathers, in trying to protect the farmers of Sherman County, didn’t think far enough ahead,” said former Sherman County Judge Gary Thompson. “They should have made the urban growth boundaries twice the size as they are now. But how do you do that? It’s hard.”

Bentz and his team stuck around after the public discussion in Moro to answer a few questions about not only the labor shortage but growing issues related to education, homelessness and poverty in Oregon. Many rural Oregonians were already feeling the pinch even before Covid, struggling just to keep their heads above water.

Bentz tied these issues together by pointing out that it all starts with the youth — we must start educating people as young as 12 or 13 by teaching them a trade or a valuable skill set, he said. By age 18 they are ready to look for work — good-paying work, too.

“What I tried to do as I went town to town is say, ‘How can we bring better businesses into this space that pay more? How can we educate people better while we have them in high school, so that they can bring higher quality work opportunities?”

He recalled a program he helped lead where students who had been falling asleep in their chairs were suddenly engaged and ready to learn. It was a small program, he said, but it had enormous successes.

“I realized we were lacking the proper type of education to make kids enthusiastic enough to learn,” he said. “The bar has really been raised on trying to drive enthusiasm.”