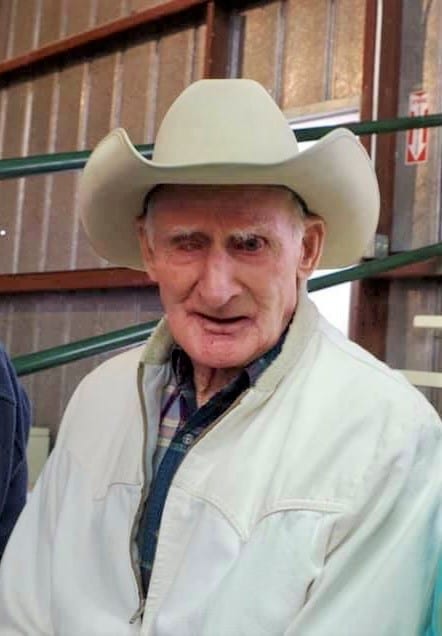 He was born to Irish immigrants, Patrick and Kathryn (O’Brien) Campbell, at the Lonerock ranch house on July 12, 1925.  The fifth of eight children, it is undetermined as to whether the birth occurred in Wheeler or Gilliam county since the county line runs through the home.

Tom attended school in Lonerock and later Condon High School.  He worked in the family sheep and cattle ranching business most of his life.

Tom married Clarice (Fancher) in Portland in September 1949 and worked briefly as a carpenter in Pendleton before returning to the family sheep ranching business, leading them to Kimberly in 1950.

Tom & Clarice raised four sons and a daughter and were very active in the Monument/Kimberly community.  He loved livestock, especially lambs and horses, and was an astute veterinarian, mechanic, carpenter, plumber, electrician, welder, and farmer, and could work wonders with haywire.

Tom provided employment opportunities to many, young and old.  In 1974, he made the difficult decision to sell the sheep and fully transition to cattle.

In June 1987, Tom married Deborah (Collins) Brown, and their 1989 purchase of the Kimberly store, along with continuing to operate the ranch, led to many new friendships and experiences.  They enjoyed traveling (highlighted by a trip to Ireland for a reunion with his Irish cousins) and entertaining their many friends, neighbors and family in their home.

Tom enjoyed reading many newspapers and magazines and was always eager to discuss politics and other current events.  He loved to tell stories and he was the subject or inspiration of many colorful tales.

Tom loved the Spray Rodeo and served as Grand Marshall in 1999.  He served on numerous boards including Monument School, Monument Grazing Assn., and Silvies Valley Grazing Assn.  He was a Past President of the Oregon Wool Growers and a director on the Columbia Power Co-Op Board for 46 years.  Tom was a member of the Catholic Church and member of the Elks for 74 years.

Following Debbie’s death in 2014, Tom was able to continue living on the ranch largely due to the care and support of Heather Riggs, neighbors and family.  In 2016, Tom moved to Summit Springs in Condon where he received outstanding, compassionate care until his death.  The family also appreciates the professional, tender loving care Tom received from Pioneer Memorial Hospice.

Sweeney Mortuary of Condon is in care of arrangements.  You may sign the online condolence book at www.sweeneymortuary.com