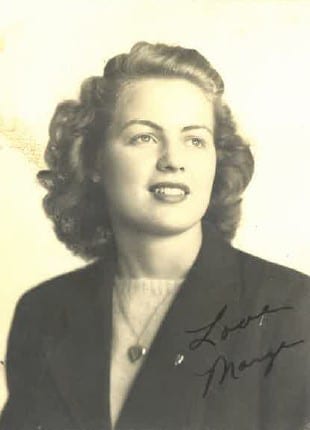 Marjorie L. LaRue, 93, of Condon, died Monday, January 4, 2021 at Summit Springs Retirement Village in Condon. No service is planned at this time.

Marjorie was born on July 6, 1927 at Princeton, Idaho, the daughter of Glen and Mary Lienhard Ackerman. She was raised at Potlach, Idaho graduating from Potlach High School in 1945. Marjorie attended Lewiston Normal School for two years, receiving her teaching certificate. She taught school at Princeton Elementary School for five years.

On June 27, 1947 she married Princeton native, Floyd Manning LaRue. The couple moved to Condon in June of 1953 after purchasing a Richfield Oil Distributorship. Marjorie was a bookkeeper for the business until 1960. The Condon School District had a teacher shortage, and she went back to teaching elementary school until 1966.  Marjorie returned to the family business until the death of her husband in 1976. She then returned to her beloved school district in September of 1976 as a Librarian Aide and Librarian for the next 18 years, and also did some tutoring. Upon retirement from the School District, she worked at what is now the Bank of Eastern Oregon for 5 years.

Marjorie was active in Eastern Star and Rainbow Girls with daughters’ Sally and Greta. She was the treasure for the United Church of Christ in Condon for 25 years and taught Sunday School there for many years.