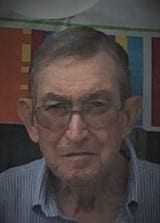 Harold Glen Ammons was born August 6, 1937 in Spencerville, Oklahoma to Wallace P. and Jessie M (Frazier) Ammons. Harold passed away on February 17, 2021 at Mid-Columbia Medical Center in The Dalles, Oregon. He had been a resident of the Oregon Veteran’s Home in The Dalles since December 2018.

Harold moved with his family from Oklahoma at age 5. The family settled in Mayville where Harold attended grades 1-8 at Mayville Grade School; he graduated from Condon High School in 1956. He joined the U.S. Army in 1959 and returned to Condon after his two years of service. He began working at Burns Bros. Grocery in Condon where he met his wife Katheryn Lou Boyer (Burns). Harold and Katheryn Lou were married in March 1965 and he also became a parent to Debby and Dan Boyer.

Harold later worked for John Deere in Condon and in Pendleton, Oregon for several years. He retired twice from his sales position with Bob Stone Subaru in The Dalles, Oregon. Harold had a loyal customer base and many people in the area would only talk to Harold when they were ready for a new car. Car sales was his calling; he enjoyed working with people and remained friends with customers past his retirement. During this time, he spent most of his time driving, delivering cars from Condon to Pendleton, and Madras or The Dalles area.

Harold was a devoted member of the Condon Elks Lodge, and he loved golf, watching bull riding, and listening to western music. He was also enormously proud of his family Choctaw heritage. Harold will always be remembered for his goodness, kindness, and devotion to his family, particularly his grandchildren who he helped raise.

Harold is survived by his stepdaughter, Debra Boyer (George Yeannakis) of Seattle, WA, grandchildren, Thea Yeannakis, Gretchen, Rachel, and Seth Boyer, and great grandchildren Sydney Boyer (daughter of Seth Boyer), Brooke Yeannakis (Thea) and Cormac Porter (son of Rachel Boyer). He is also survived by his brother Jim Ammons (DuAnn) of Summerville, Oregon, and sister Patsy Moffit (Dennis) of Pendleton, Oregon, and many nieces and nephews who adored him, and his sister and brother-in-law, Sue and Gary Miller of Condon.

Harold was preceded in death by his wife, Katheryn Lou Ammons (2005), his stepson, James Daniel Boyer (2013), and his father, mother, and sisters, Helen Owen and Sue Tolan.

In lieu of flowers, the family asks that donations be made to Condon Elks Lodge #1869 and St. John’s Catholic Church in Condon, Oregon.

Due to Covid-19, a graveside service will be held later in the spring.