“Hot Licks” is back in Oregon, with original owner where she belongs 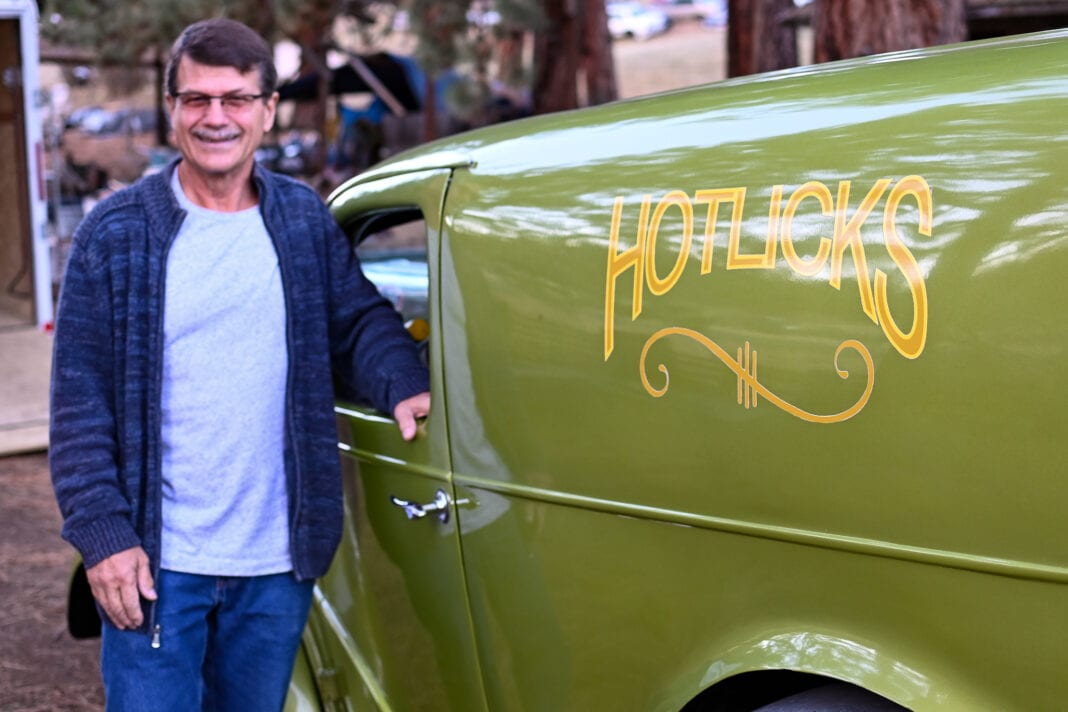 When thinking of great muscle cars and dragsters that are iconic pieces of the American fabric, few people would think to include a 1948 cargo truck from England.

Those people have not seen “Hot Licks.”

In 1978, Bobby Byars, who was raised in Wasco and now resides outside of Fossil, purchased the 1948 Anglia – an English model of Ford – from a couple of guys in Portland.

“They found it sitting in a field,” Byars says of the car. “It was basically rusting away.”

The car was advertised in the Oregonian classified section and Byars went to take a look.

“I was looking for a van to buy and saw the ad. I was drawn to it as soon as I saw the car,” Byars reminisced.

Byars worked on the car and souped it up. He dropped the engine from his 1966 Corvette into the Anglia and pushed the English model Ford to 600 horsepower. Byars removed the back seats to make room for the engine and firewall.

Soon Bobby had it ready to race at the drag events in Woodburn.

It was 1979 and arriving in Woodburn to race the first time, Byars was told that he couldn’t compete because he didn’t have a helmet or fireproof suit. “I had a motorcycle helmet and a leather jacket and they said that was good enough,” he says with a laugh. “I didn’t know anything about this fireproof stuff.”

Initially, Bobby says that people at the track were skeptical about the car. It did not fit the mold of a racecar. Those skeptics went quiet after watching Hot Licks race.

Later in 1979, Bobby and Hot Licks were pitted against a dragster that was winning every race. Byars said that he beat the dragster and that the crowd went nuts. Soon, Hot Licks was the car to beat and had a cult following. “I beat everybody,” Byars says as he flips through newspaper clips in a scrapbook.

Soon, Byars began to look for even faster cars. He gravitated towards so-called “funny cars” that have fiberglass bodies and run on alcohol. He decided to sell Hot Licks and to upgrade to a funny car in 1984. Byars took Hot Licks to San Francisco and sold her to a friend of a friend.

After doing so, he began to regret it. So began a 36 year quest to find Hot Licks and to bring her home.

Occasionally, he would hear rumors. There were only 800 models of the Anglia manufactured and so it was very unique. Also, the name “Hot Licks” that was painted on the side of the vehicle in gold leaf paint endured and people knew of the car. Still, he didn’t know where it had ended up.

Beginning in the mid-90s, Byars says that he began an earnest search for Hot Licks with a dream of owning it again. He heard that it was in Arizona. With help from his daughter, he found the owner but was unable to pay the asking amount. Byars told the owner that if he was ever thinking of selling it, to give him a call. The owner never did so and sold the car.

Byars again lost track of the car and again searched for Hot Licks by scouring internet classifieds and racing websites.

Finally, Bobby tracked the car down. It was in Pennsylvania. The new owner had done additional upgrades to the car, including a new frame. But again, the car was sold before Bobby could get to it. Byars learned that the new owner was in Boca Raton, Florida and that he too had made additional upgrades to the vehicle. The car was then sold again in 2005 but Bobby couldn’t find it for several years.

One day, Bobby was poking around the internet “just having fun and looking at old cars.” Bobby says that he had saved some money up and was thinking of buying a hotrod. “And then, there was Hot Licks, for sale in New York.”

Bobby made contact with the owner, a man named Doug who lives in upstate New York. “He had been looking for me after he did research on Hot Licks,” Bobby said, clearly touched by this gesture. “He had spelled my name wrong – with an “E” in Byars. He found an obituary and thought I was dead.”

Doug and Bobby began talking on the phone and earlier this year, Bobby went to New York to get Hot Licks. Doug was happy that the car was back with its original owner after 36 years. The car was shipped to Bobby and arrived just before Thanksgiving.

Byars says that the car has been significantly upgraded since he first purchased it. “Each owner did something to improve it,” he says.

The car still has the 454 Chevy engine but also has a 671 blower. With 800 horsepower, it may struggle to idle in a parade.

When asked if he will hotrod it again, Bobby says that he is looking forward to having the car in car shows, but with a coy smile he adds “it does like to go.”

Byars, who says he has “always been a hotrodder,” was raised in the culture of fast cars. “My dad had a ’62 Ferrari,” he says with a wide smile. “He took me everywhere and did road races. I got to see Mario Andretti, Dan Gurney and all of those guys.”

1962 is an important year for Byars, and not just for the nostalgia of his father’s Ferrari. It was also in 1962 that he met Theresa. “She was my first crush,” Byars says. But soon after meeting, Theresa moved with her family to Montana.

Theresa later returned to Wasco and finished high school there. Bobby and Theresa would see each other at class reunions and soon, Bobby’s sister began tugging on Theresa’s sleeve. The couple was married three years ago.

The couple plans to spend their retirement travelling around to see their grandkids and great-grandkids, and to take them to car shows with Hot Licks.

“It was a miracle that we got together. It’s been one miracle after another,” Byars says.