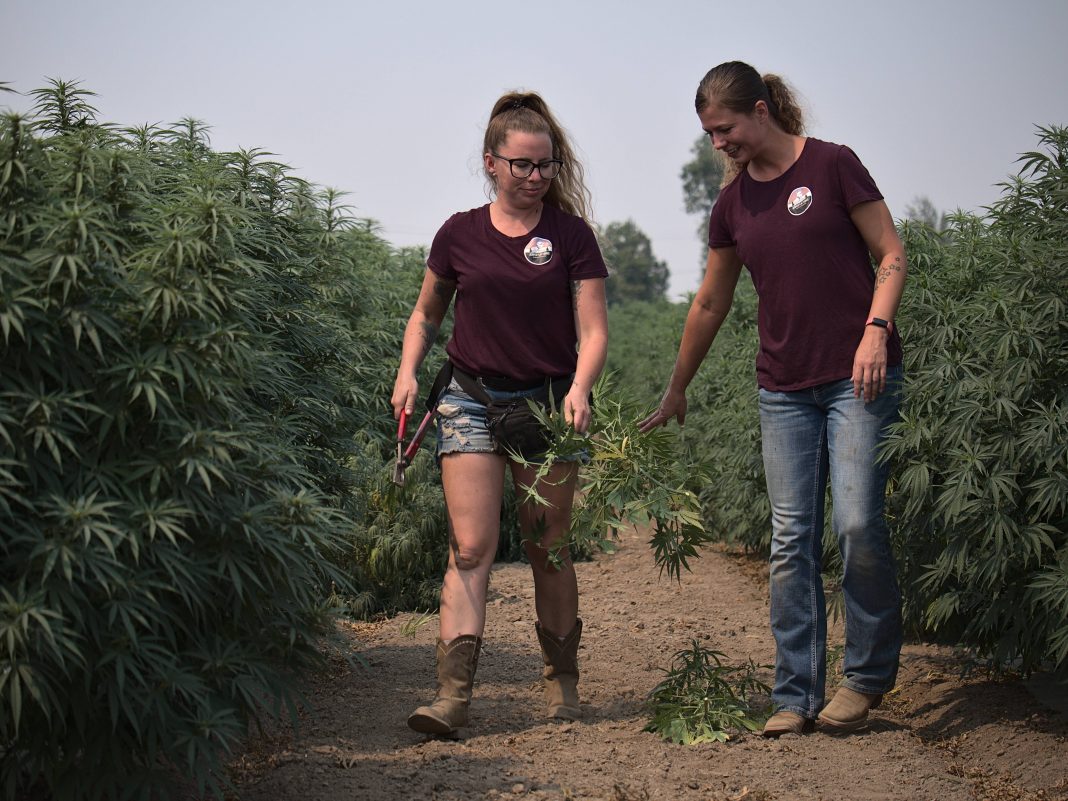 Mandy Olsen’s eyes twinkled behind her glasses as she plunked a white plastic bucket of black goo on the table.

“This,” she said, “Is close to a year’s worth of work.” The black goo is a tacky, tar-like mix of extremely concentrated hemp oil and plant fats. It’s the unrefined product of close to three thousand pounds of processed hemp flower, and it’s Olsen’s business at Juniper Flats farm.

Juniper Flats, created by Olsen and her partner Aleisha Olson, sells high quality medicinal CBD products. Though they sell CBD flower, they specialize in a line of topical pain relief balms and sprays — with names such as “The Rescue Stick” — they render from the crude oil in the white plastic bucket. It’s the best for topical balms, Olsen said, because of the natural plant fat it contains.

Oregon’s CBD industry exploded after the 2018 Farm Bill legalized industrial hemp by removing the crop from the Controlled Substances Act. If a farmer can prove that the flower their plants produce contains less than 0.3% of THC, the psychoactive compound in marijuana, they are free to sell and ship products that contain CBD, or cannabidiol. CBD’s effect as a pain reliever has been well documented in the science world since research was allowed in 2018.

In 2018, the U.S. Food and Drug Administration approved a seizure medication called Epidiolex that contained CBD, but the legality of CBD in general is still murky. Officially, the FDA prohibits the sale of CBD products intended to have a therapeutic or medical use — but this isn’t enforced. Almost all states allow hemp-sourced CBD for any use, and products advertising pain relief and other medical benefits are common on shelves across the nation.

In 2019, there were 64,000 acres of industrial hemp growing in Oregon. In 2020, that dropped to 28,000 acres and in 2021 it dropped to 6,539, according to the Oregon Department of Agriculture. Oregon’s boom and bust follows a national trend in which farmers looking to profit on the newly-legal cash crop flooded the market with supply — and sometimes couldn’t sell what they grew.

Though most of Oregon’s acreage is growing plants just for CBD products, industrial hemp has the potential for a lot more — if and when federal regulation allows it. Hempcrete, a construction block made from the woody inner portion of the hemp stalk, and textiles made from hemp fiber are growing in popularity according to data from the U.S. Department of Agriculture.

The National Industrial Hemp Council projected that there will be 201 million pounds of excess biomass from hemp production in 2021. This biomass, which they say can be made into high quality livestock feed, could solve the nation’s livestock feed shortage but the Center for Veterinary Medicine, a branch of the FDA, hasn’t approved it.

Juniper Flats farms, like other small growers, found their niche in the artisanal market. They grow their plants from seed in an on-site greenhouse from seeds they selected from Oregon CBD growers, and they don’t work with processors that mix their product in with that from other growers.

Being picky, Olsen said, makes it harder to find processors in Oregon. But an intimate knowledge of their ingredients — such as an additive lavender oil they source from a farm in nearby Bakeoven — is one of their selling points.

Throughout their growing process, they send samples to a lab in Portland to make sure they are under the 0.3% THC legal threshold. The ODA said that last December, 93% of registered hemp farms in Oregon passed their preharvest THC test.

But keeping their plants high in CBD and low in THC is work, Olson said. Hemp plants are hermaphroditic, which means that if they experience the right kind of stress, they can change gender. The plants they grow for CBD are all female, but if one of them switches to a male and fertilizes other plants, they become less potent in CBD and can produce more THC.

Their vigilance, Olsen said, is what makes their flower and oil more potent. But it’s also more work.

“It’s a constant battle,” Olsen said. “Every day I’m out there, looking for male plants and pulling them.”

The ODA recently announced that they’ve expanded their boots on the ground hemp staff from four to 12 positions after a spending boost from 500 thousand to 3.5 million dollars was approved. The staff increase and the bill approval is in response to concerns that legal hemp farms were being used as a cover for illegal marijuana grows, officials said.

Olsen said she started growing hemp at Juniper Flats because she believes in CBD’s medicinal potential.

“I grew up a sick kid,” Olsen said. “And CBD has really helped me in a lot of ways.”

As we strolled the rich and dense rows of hemp plants, Olsen and Olson chatted optimistically about the future of Juniper Flats. Despite their challenges in the young industry, they are growing. And this year’s plants, Olson said, are looking like they will produce some potent, fatty hemp oil.