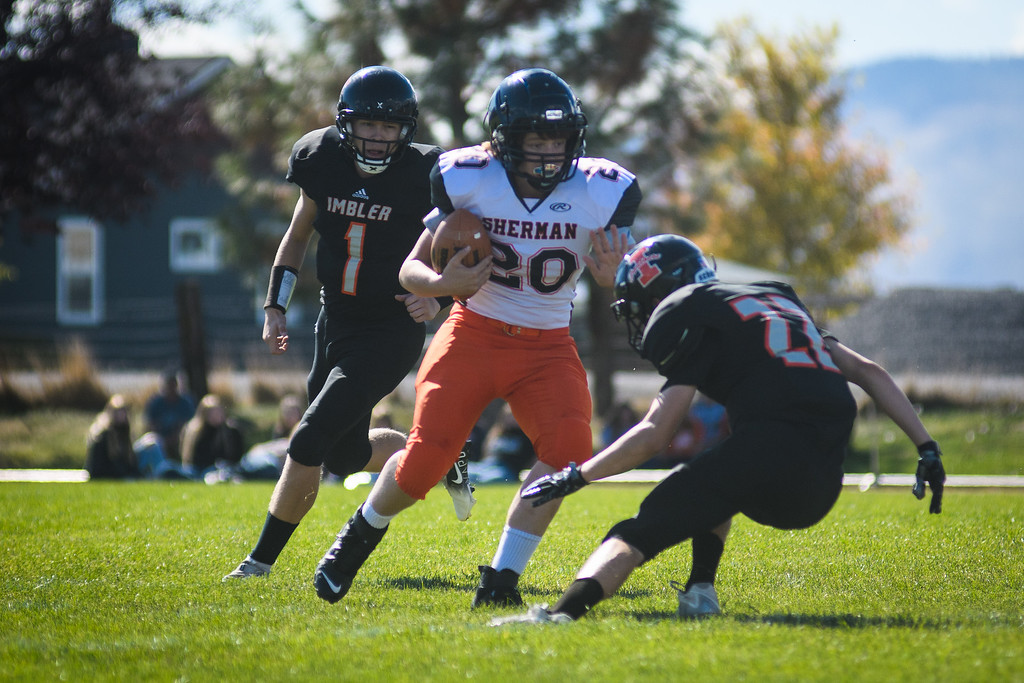 The Devil Dawgs traveled to Imbler for a day game against the Panthers on October 1st.  While the game started well for the Devil Dawgs with a recovered onside kick thanks to a big hit by Braden Carnine followed by a quick drive capped off when Kole Martin ran in for a touchdown.  A failed conversion had Sherman/Condon leading 6-0 early in the first quarter.

Strong defensive play—led by Condon senior Braden Carnine forced Imbler to punt the ball back to the Devil Dawgs.  Unfortunately, after a short driver Sherman/Condon—facing a long third down throws an interception.  Imbler capitalized on the turnover scoring a touchdown but also failing on their conversion attempt leaving the game knotted at six.

On the next Devil Dawg drive Kole Martin got some key blocks and found plenty of green grass to take the ball 60 yards into the endzone.  On the 2-point conversion play Martin threw a pass to Josiah Carlson.  Both Carlson and an Imbler defender came down with the ball.  When the dust settled Carlson had sole possession putting the Devil Dawgs ahead 14-6.  The lead didn’t last long as Imbler tied it up on the next drive with just over a minute remaking in the first.

The Devil Dawgs lost two key players on subsequent drivers.  Frist to get injured was Condon Senior Braden Carnine, on the next driver Sherman sophomore Talon Dark came out with an injury as well—neither would return to the game.

Lacking two key players on defense the Devil Dawgs had a difficult time stopping the Panthers who would score three more times before Sherman and Condon could get Eduardo Rubio into the endzone bringing the score at halftime to Sherman/Condon 20 and Imbler 36.

The Devil Dawgs received to start the third quarter where they moved the ball well and Kole Martin was able to scamper into the endzone from the three-yard line.  Kole and Josiah hooked up again for another two-point conversion bringing the Devil Dawgs to within eight.  That is as close as they would come the rest of the game.

The remainder of the game was controlled by the Imbler Panthers who eventually put 52 points on the board while the Devil Dawgs remained at 28.

Coach Kyle Blagg was encouraged by the way that his team responded once adversity hit and said “We had several kids play the best football game they’ve ever played.”  This Friday, the Devil Dawgs travel to Arlington to face the co-op team of Ione/Arlington.  Kickoff at 7:00 PM.